Is it easy to can? Canned Port Sauce: great holiday gift 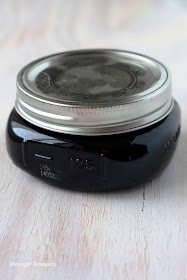 Have you done it? Were you scared? Thrilled? Successful?

When I was growing up in Moscow, my dad built a huge pantry for my mom where she kept jars filled with canned tomatoes, peppers, carrots, garlic, cherries, jams, etc.

For some reason, I don't actually remember her canning: maybe I was told to stay out of the kitchen for fear that some of the boiling water would scald me. This seems rather strange to me because I remember helping my mom with many other cooking tasks.

What I do remember are the rows of colorful jars and enjoying their bounty throughout the year.

This past Saturday, after my friend Cindy and I got done making Graham Cracker, Dulce De Leche & Whipped Cream desserts, we tried our hand at canning: a first for both of us!

Cindy wanted to make port wine jelly for gifts, and that's what we set out to do. 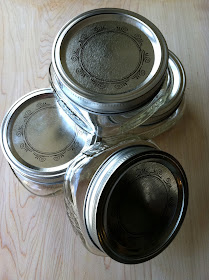 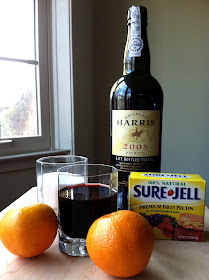 Directions
1. In a large pot, boil the jars for 15 minutes. Add the lids and boil for 5 more minutes. {Leave the bands alone: you'll use them later.}
2. Meanwhile, in a stainless steel pot bring port and sugar to a boil and boil for a minute stirring constantly.
3. Remove the pot from the heat and add pectin. Stir. Add mandarin zest.
4. Ladle the mixture into the jars, leaving a 1/4 inch space between the liquid and the lid.
5. Top the jars with the lids and screw the bands on tightly. Put the jars back into the boiling water for 10 minutes. Turn off the heat and leave the jars in the water for 5 more minutes.
6. Carefully remove the jars from the water and let them sit on a towel or wooden board for 12-24 hours. 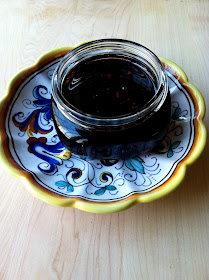 Cindy nicknamed us the terrified chefs because we were slightly scared of the boiling water and acted like two little scared girls when it came time to take the jars out. The entire process, however, wasn't difficult at all.

We were BEYOND thrilled when  we heard all four jars making a "ping" sound, letting us know that they were properly sealed. The only disappointment was that the jelly wasn't really jelly: it was more of a sauce. That's why I called this recipe Port Wine Sauce with Mandarin Zest!

Cindy, being a very meticulous person, opened 3 of the jars, brought the sauce back to a boil and added liquid instead of powdered pectin. She then sealed and processed the jars again and VOILA: port wine jelly!

I, on the other hand, have a jar of port wine sauce at home. And I'm not complaining--I'm thinking it'd be great over ice cream, or used to sweeten tea, or maybe added to some braised meats. What would you do with it?

Thanks for stopping by Mango & Tomato. I love reading your comments and will try my best to respond to any specific questions you might have. Come back soon!